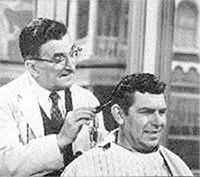 I tend to use analogies when trying to get a point across. One of my clients laughs about it, but in the end, he says they work and help him understand things that have baffled  him in the past. So, when I thought about what my first post should be about I decided to share one of my analogies to help people understand social networking and social media. Hopefully it’ll help you as well.

If you’ve ever watched The Andy Griffith Show, you’ve seen social networking and social media in action. Think about Floyd’s Barbershop. Floyd’s in there talking away as he cuts Andy’s hair. As Barney and Howard walk by they see the guys through the window and decide to go in say hello. Then Aunt Bea stops in as she passes by, and even Opie gets off his bike to go in and see what’s going on. While everyone’s there, they talk about the salesman who passed through town, the fact that Otis was in the jail sleeping off a rough night, that Ernest T. Bass had been throwing rocks again, the upcoming church social, or even the news they heard from Raliegh.

Spending time in Floyd’s was a good way for everyone to catch up on the Mayberry news, but it didn’t necessarily mean they’d get the most up-to-date news from nearby Raleigh. To get that news they’d have to talk to someone who had been there recently or knew somebody else who had. And even then, the news may not be as recent as they’d like. Whatever they shared though, whether it was current Mayberry news or not-so current news from Raleigh, it was done through actively engaging in social networking.

Now, as for the social media part of this analogy…that’s easy. It’s Floyd’s Barbershop! The barbershop gives everyone a place to gather so they can share ideas and news…social networking.

The thing is, social networking is nothing new. People have been doing social networking since the first time two people got together and talked! What’s changed though, is the way we communicate and the size of our community. Nowadays, thanks to the internet and social media tools like Twitter, LinkedIn, Facebook, and others our community has expanded far beyond our own little Mayberry. We can certainly use those tools to network with people in our own area. But the really cool thing is, that rather than having to know somebody who knows somebody in Raleigh to get the news, we can hop on the computer and get the news as it happens directly from the folks in Raleigh. Andy and the rest of the people in town didn’t have that luxury back in Mayberry’s heyday!

Our community has expanded far beyond the places we can physically go to and we don’t have to be stuck in Mayberry (although I’m sure there are worse places to be stuck!). Now we can use social media tools to reach out to people all over the world who share a common interest. These tools can help us create a network of people who we might visit on a cross-country vacation, enable us to connect with others on a professional level to find a new job, keep us in touch with relatives and friends, or maybe just help us meet people who have the same interests and hobbies. The possibilities are as endless as the conversations that take place between two (or more) people. Whether it’s for work or play, social media and learning how to use those tools for networking can take you to Mayberry and beyond!