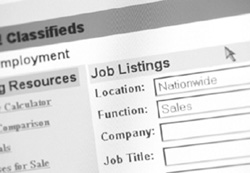 I talked to a woman the other day who hadn’t signed up on any social media sites because she thought they were all about finding dates. Not so, I told her. There are plenty of dating sites out there but that’s not the only reason to use social networking websites. People use them to keep in touch with friends, meet people with common interests, for professional reasons, and even find a job. As we talked, she started to understand a little bit more about how she could use some of these tools in her personal and business life. She has her own business, but in this economy, it’s taken a hit. Because of that she’s keeping her eyes and ears open for a new direction to take her business, or even a new job that may be a fit.

Check this out, from the Wall Street Journal.

Looking for a new job, Alexa Scordato didn’t email or call her contacts about possible openings. Instead, she messaged them via the social-networking Web site Twitter.com.

Her brief message: “Hey there! Looking for a Social Media job up in Boston. Are you guys doing any entry level hires?”

Within a week, she had an interview. Within two weeks, she had a job.

The site, which lets users publish supershort updates of what they’re doing, is a virtual meeting ground where a range of communities — from moms to media professionals — come to converse informally.

It’s been criticized as a site for sharing mundane details about everyday activities. But people like 22-year-old Ms. Scordato, who used Twitter to privately message some people she’d met at a conference, show the site can be more than that.

“I would guess that if I had just sent them a long email with my résumé, I might not have gotten a response as fast as I did,” says Ms. Scordato, who was hired by Mzinga, a Boston-area company that helps businesses use social technology.

Think about being invited to a party, where you know you’ll be in the midst of people who may have some good connections, or may even be looking to hire someone with your skills. You wouldn’t go up to each of them and say, “Hi, I’m Jenny and I’m looking for a job,” as you force a resume their hands. OUCH! That would probably be the best way NOT to have one of them help you. Instead, you’d probably mingle and have a good time, and possibly mention that you’re looking for a job after you’ve chatted a bit and decided it makes sense. Twitter is much the same. Once you get an account, follow people who interest you, start tweeting messages that are pertinent and you think would be of interest to others, then get the word out that you’re looking for a job.

As the WSJ article says,

Be careful about publicizing your job hunt on Twitter if you don’t want your boss reading about it. But if you’re unemployed, sending an occasional tweet that explains the kind of job you’re looking for could yield responses from recruiters. You can also seek jobs being promoted on the site by searching for phrases like “job opening.”

There are many excellent online tools available these days to anyone searching for a job, and learning to use them wisely can help immensely!