Back in November I bought an awesome little Asus laptop computer at Best Buy (I love the computer, btw!). When I got to the point of paying for it, I got the “buy the extended warranty” talk. The guy said it would cover the computer if it broke and left it at that, and I decided against it.

Fast forward to yesterday. I went to Best Buy with my brother who bought his own way cool computer – just like mine. (He’s been drooling over my little Asus computer ever since I got it, so he wanted to get his own.) When he went to pay for it, he got a different story about the extended warranty. The guy told him that it would indeed cover the repairs if it broke, but the warranty would also include an extra battery as well as a new power supply should he need one. At only $59, Alex decided it was worth it and got the extended warranty.

Had I known what the warranty really covered, I would have bought when I got my computer too. I was a little taken aback when I heard what all it covered, and when I mentioned it to the guy helping my brother, he suggested I call 1-888-BESTBUY and talk to the customer service folks. His thought was that the guy who checked me out probably just didn’t know the warranty very well. (DUH!)

So, this morning I called 1-888-BESTBUY and talked to someone who told me warranties have to be bought within the first 14 days after purchasing a new computer. They said due to the way their warranties are written, there’s no way around it. It didn’t seem to matter that I wasn’t given all the info to make an informed decision. So, I was transferred to the customer service folks in the corporate office.

The answer I got from the first person at the corporate office wasn’t any better…I had to buy a warranty within 14 days…blah…blah…blah. Again, it didn’t seem to matter that I didn’t get the full info about the warranty.

My next person to talk to was the CSR rep’s supervisor. His story was pretty much the same as what I heard from the others. He said he was sorry it happened but repeated what I’d already heard about the 14 days. He said the best he could do was give me a $15 gift card to Best Buy. He did offer to talk to the store I bought the computer from and let them know they need to train their people better. Other than that, he said there was nothing else he could do. That’s definitely a good thing, but it sure didn’t feel like they valued my business very much.

I had Twitter open while I was on hold and was tweeting as I waited, which caught the attention of Jason, a Best Buy rep, who obviously monitors what people are saying about the company. 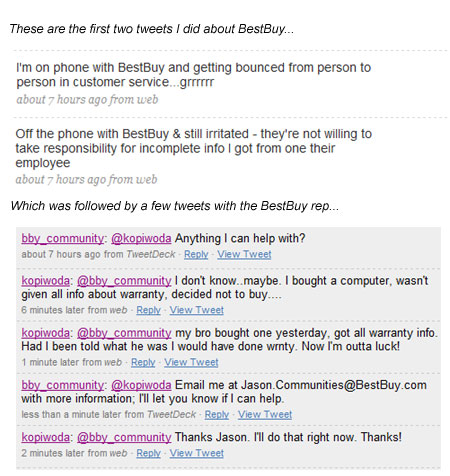 In the end, Jason came through for me! He said they couldn’t do a warranty the usual way, which I understand. Since they use a third party for the warranties, they’re set up in a very specific way, and even if they tried to sell me one it wouldn’t be valid. So instead of giving me the same song and dance about the 14 days he actually did something. He offered a work around for the warranty….and it totally works! I’m perfectly happy with what Jason worked out for me and finally feel like someone understood what I was saying. He actually listened…and totally got it.

I’ll definitely be shopping at Best Buy again…something I wasn’t so sure of earlier today.