In the past when someone gave a presentation, some of the things he or she had to compete with were people talking to each other, doodling on their notepads, reading books or magazines, or even some of the audience members taking a nap. Things like this can be extremely annoying for any presenter, but they can usually handle the annoyance and go on with the talk.

These days speakers have to be on their game and ready for anything. They still have to contend with the usual annoyances mentioned above, but that’s not all. Our culture is so wired these days (and I don’t mean from coffee!) that many times people are Twittering, emailing, texting, Facebooking, or in some other way instantly documenting what the speaker is saying or how he’s saying it. In a very real sense it’s not just the speaker’s show anymore!

At SXSWi this past week, at literally every session I attended people were armed with iPhones, Blackberries, laptops, or cameras. Many of the speakers, especially when there were panels with more than one person, were monitoring the Twitter stream, ready to address comments…good and bad…from audience members as they happened. At times it side-tracked the conversation, and made it apparent the speaker hadn’t intended on going in a certain direction. In most cases though, it didn’t detract from the presentation itself. Instead, it changed the dynamic from an “I’m teaching you” atmosphere to a “we’re learning together” atmosphere. So in that sense the interactivity it created was pretty valuable.

Below are a few examples (positive and negative) I pulled off of Twitter today. One thing to be sure of, people aren’t shy about saying what they think about the speaker’s style or content. It’s all fair game. 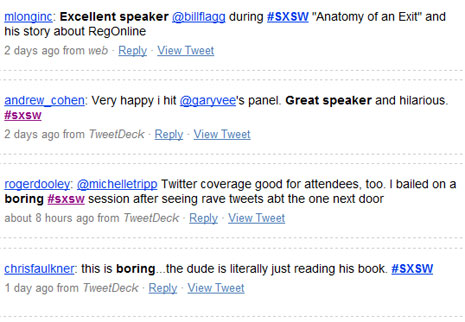 I have mixed feelings about pulling out my laptop during a presentation. Instead of the old fashioned pen and paper note-taking I used my laptop, so that part isn’t much different than the many college lectures I attended with notebook in hand. However, during most of the presentations I sat in on at SXSW, I also had Twitter open a fair amount of the time. Even though I was listening to the speakers and taking notes, I have to admit, they didn’t have my full undivided attention. Watching Twitter during the talks did serve a purpose though. I was able to read what others were thinking at nearly the same instant the speaker said something and gain different perspectives on what we’d just heard.

So was watching Twitter during the talks a good thing? A bad thing? I’m not sure. I could probably argue either way, but next time, I may just leave Twitter off, use my laptop to take notes, and do my best to give the speaker my complete attention.