. . . or, how doing the right thing in a tough situation can actually help your business.

Pet food companies are notorious for trying to bury their pet food recalls. It shows a real lack of respect for their customers as well as a lack of understanding of how social media works. They have been known to do all of the following, which are all pretty darn shady:

Pet owners are getting wise to these slimy tactics though. Many of us keep our eyes out for recalls and are eager to get the word out whenever we see them. I, for one, scramble to post a pet food recall at PetsitUSA. Many times, recall notices pop up on blogs and social media accounts long before they appear on the company websites. And we quite often call out a pet food company when we think they are jerking customers (and their pets!) around. Some pet food companies are learning though.

Recently Purina had to recall some cat food (FYI, here it is:  Purina One Vibrant Maturity recall) because of possible contamination with salmonella. Rather than try to sweep the recall under the rug, they set up pay per click ad campaigns on Google, Bing, and Yahoo to announce it. It’s been almost three weeks since the recall was announced, and their ads are still showing up in searches. Here are some screenshots of the ads: 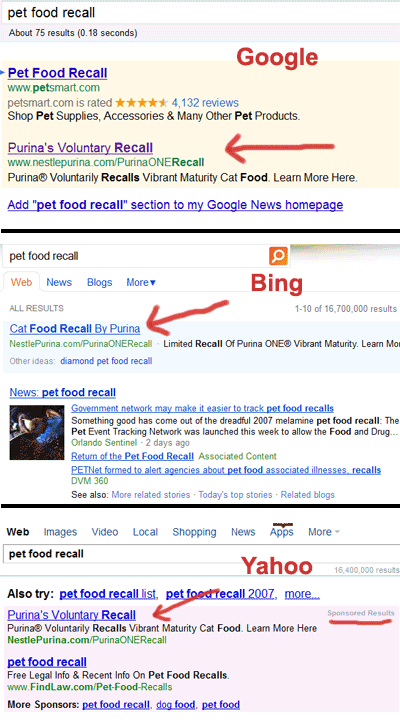 Why publicize their own recall?

The recall happened. It’s a fact. People ARE going to talk about it, so it’s best if people can hear about it from the source, Purina. The truth is, Purina will likely lose customers due to the recall. But, they’re going to lose a lot less than they would have if they tried to hide the recall. And my guess is that they will even gain customers because of the way they handled it.

Rather than letting social media work against them, Purina has figured out how to make it work for them, the pets who eat their food, and their customers. And not only is it the right thing to do, but it’s damn good PR as well! This isn’t just about pet food recalls though, it’s about how companies can use social media to their benefit, even in a tough situation. Many companies are catching on, and Purina’s just one example.