What is Periscope, and how can it be used? 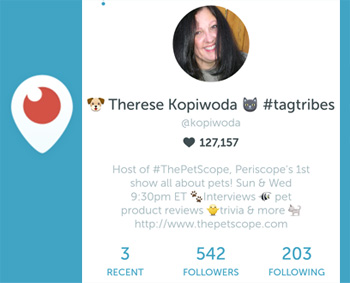 If you haven’t heard, livestreaming is taking off like never before. Apps like Google Hangouts and Skype have been around for quite a while, but there are a number of new apps that are getting a lot of people very excited. In the past several months new apps have been released including Meerkat, Periscope, MyEye, Blab, Facebook’s Mentions, and others. And there are more on the way!

In this blog post, I’d like to introduce you to Periscope, my new obsession! If you’re not familiar with it I’ll give you a quick rundown and hopefully you’ll be intrigued enough to check it out.

Periscope is owned by Twitter, and is a free app for iPhone, iPad, and Android devices. It allows you to livestream from your device, broadcasting to people all over the world.

Because of the way Periscope integrates with Twitter, the best way to set up your account is with your Twitter account. If you don’t have a Twitter account, you can use your mobile phone number. However, if you’re not using Twitter in conjunction with Periscope, you’re going to miss out on the easiest way to contact other users, as well as key features that will help with your marketing efforts.

At this point, once you choose a username you will not be able to change it. So, choose wisely!

How a broadcast works

If you’re viewing a broadcast and want to comment or ask a question, just tap on the “say something” box, type your comment, and hit enter. You can also respond to other viewers. When you see them comment, tap on their comment and you’ll be able to respond directly to them right there in the chat.

People who do not have the app, can view broadcasts from the web but all they can do is watch and listen. They won’t be able to chat or use other features that are available on the app.

Examples of how people are using Periscope

That’s a quick overview of the very basic mechanics of Periscope, but the potential of how Periscope can be used for business is endless. Here are just a few ways people are making it work for them:

Behind the Scenes shows – Brick and mortar businesses are great at this. A prime example is John Kapos (@chocolatejohnny), of Perfection Chocolates in Sydney, Australia. He makes people drool over chocolate every single day by showing us the yummy products and how they’re made. As a result, his business has increased dramatically since he’s been on Periscope.

Animal Training Sessions – Lara Joseph from The Animal Behavior Center (@AnimalBehaviorCenter) does regular scopes on how she trains birds, pigs, dogs, and other animals. It’s very interesting and entertaining.

Direct Sales – Many people in direct sales are using it to give people information about the products they sell, and answer questions about the company, products, how to get involved. etc.

I’m using Periscope in a rather fun way. I have a show, called The Pet Scope, which is the 1st show on Periscope that’s all about pets. I interview professionals in the pet industry, do product reviews, have a pet trivia night, talk about pet business topics, and many pet-related topics. I’m providing valuable content for pet lovers, whether they have dogs, cats, birds, horses, or other pets. And since most (but not all!) of my clientele works in the pet industry this is a great way to connect with them too; showing them various ways the platform can be used to market their own business.

It’s time for you to start using Periscope! When you get there, follow me. My username is @kopiwoda, which is also my Twitter username. And be sure to let me know you’re there because you read this post!

I’ll see you on Periscope!