3 ways to get great new followers on Periscope 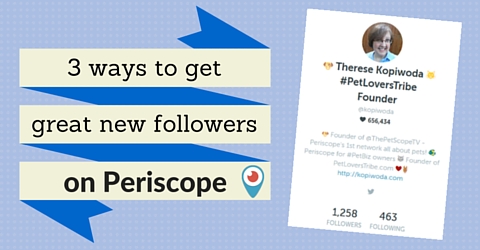 Whether you’re using Periscope to promote your pet business, retail products, consulting service, or some other type of business there are many ways to grow your following. Perhaps the most important thing to remember though is the interactive nature of Periscope. The fact that it is based on real time interaction means that we must take time to get to know one another, and connect with our viewers if we’re going to succeed. With that in mind, here are three things ways you can get noticed, and building your Periscope following.

Periscope is different than any other social media platform. It’s live, it’s interactive, and it’s personal. The only way people are going to get to know you is to see your broadcasts. So, if you’re using Periscope for business you need to let people see who you are in order to build the ‘know, like, and trust’ factor that you hear so much about. It’s important that you scope every day. You also want to have one or two regularly scheduled broadcasts each week. When you do, people will come to rely on you scoping at those times and will be more likely to watch.

One caveat to this is that you must provide something worthwhile for your viewers. If you scope about topics your viewers find interesting you will know it because you will start to have regular viewers. They’ll become your best cheerleaders and will tell others about you.

Find out who the influencers are in your niche. It only stands to reason that they will have a larger number of followers that some other people in their particular niche, and this is usually for good reason. They provide good content and they connect with people. This results in people getting to know, like, and trust them. So watch and learn! But don’t stop there.

When you’re watching a scope it’s extremely important to remember it’s not just about the broadcaster! There are other people in that scope too, the viewers. And while they may not have as many followers as the person you’re listening and watching, you never know who might be viewing along with you. It could be someone who will want to interview you, collaborate on a business project, buy your pet product, or even hire you to build their next website! And you’ll never know unless you open yourself up to possibilities. Use the chat as an opportunity to get to know others. Every time you go into a scope, make it a point to say hello to a few new people and read some profiles. Who knows who you might meet.

Becoming an active member of a Periscope tribe is a great way to meet people who share a common interest. There are a number of tribes to pick from and each one has their own flavor and purpose. Besides being on Periscope and Twitter, most of them have Facebook groups as well. The Facebook group serves the purpose of a central gathering place. People will use the group to ask questions, talk about Periscope news, post replays, encourage one another, and more. Some of the groups also sponsor various events, and activities to help promote one another and bring people together.

Tribes such as Periscope Success and Periscope Love Tribe welcome anyone regardless of their interest. There are also niche related Tribes such as the #BoPoTribe, which promotes body positivity and Periscope PeriGirls, which is specifically for women. And, if you’re someone who loves pets you’ll want to join the #PetLoversTribe.

I founded the #PetLoversTribe to bring together people who love dogs, cats, and other pets and are using Periscope. It’s been a very successful group, enabling pet lovers and people who own and operate pet businesses to have a gathering place, of sorts. Many scope about pets and/or their pet business. Many are happy just to watch the people who are broadcasting. And, as mentioned above, you’ll find the group on Facebook as well as Periscope and Twitter.

Notice, above that I said you want to become an active member of a tribe. Joining a tribe isn’t going to be enough. It’s not the simple act of joining that will make things happen. As with any community, when you join a tribe, you need to participate! Attend fellow tribe members’ scopes, post in the Facebook group, offer help when others need it, etc. Show people you’re willing to give to others in some way. People will see you as a valuable member of the group and as a result, they’ll want to get to know you. You may very well start building meaningful relationships, find others to collaborate with and in turn, build your network.