You can overcome the fear of broadcasting on live video 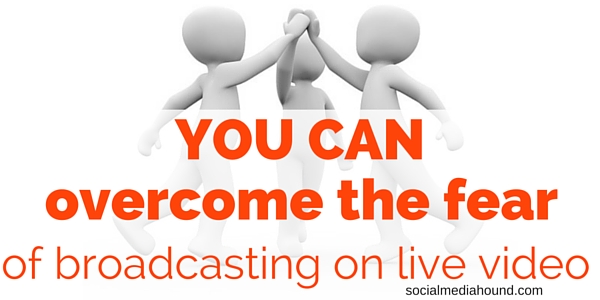 Live video can be very daunting for many people. The idea of hitting that ‘broadcast’ button on Periscope is enough to send them into a panic or paralyze them with fear. I know a lot of people who desperately want to use live video to promote their businesses but they simply can’t get past that first broadcast! The thought that people might actually watch and listen, is terrifying. The thing is though, it’s quite possible to overcome that fear and even enjoy using apps like Periscope or Facebook Live!

Before I get to the real meat of this blog post I need to tell you a little about the #PetLoversTribe. It is a community I founded for pet lovers who broadcast on live stream apps like Periscope and Facebook Live. Every weekday we do a scoping challenge. (‘scoping’ is the term used for a Periscope broadcast.) One of the members comes up with a topic and people who want to participate will do a Periscope broadcast talking about that topic. It’s a way for us to come together as a community and get to know each other a bit better. Topics run the gamut and can be fun, informative, or even thought-provoking.

Last Tuesday Tricia Clements (@MuttButs), owner of MuttButs, introduced the scoping challenge and asked, “How has live stream helped or changed you?” It was a great topic, and people had a lot to say about it! And as I listened to the broadcasts, I heard a very strong theme emerge – overcoming the fear of broadcasting.

As each of us talked about what live streaming meant to us, nearly almost all of us talked about how terrifying it was to hit the ‘broadcast’ button the very first time. Even though some of us, including me, have had quite a bit of experience talking in front of a group, Periscope was different. Talking to our phone, with no eyeballs to look into, made it very daunting! We all found the courage though, and are now regular broadcasters. Here are just a few of the comments from three of the women who answered the scoping challenge:

Tricia originally got started on Periscope thinking the live video would help her with some video production she was doing for her business. The thought of speaking in front of a group though, was terribly nerve-wracking for her. In fact, when she was in college she had to take a speech class, which she put off until summer because “summer classes are a lot of times easier than during the winter,” and when she was done, she swore she’d never do public speaking again. Periscope has changed that though. She feels more comfortable in front of a camera and now she would even consider doing a talk in front of an audience!

Jamie Kasarda (@HolisticPetOwner) is a Doterra representative, veterinary technician, former pet first aid instructor, and worked in fundraising for an animal shelter. She’s done a lot of public speaking but Periscope tripped her up at first, too. Over time though, she’s come to love it, and all the connections she is making with other pet lovers. Live streaming has “helped me with my public speaking skills. It was making me really nervous to go on live.” At first, she said, it was “unnerving and uncomfortable and so I thought I need to do it more. That has helped me so much, because now I’m so comfortable.”

Monique Rodriguez (@SilverPawStudi0), owner of Silver Paw Studio, is another one who was nervous about live video. She couldn’t even sleep the night before! She said, “I was a wreck, but I survived.” She says she used to be very shy, but Periscope has helped with that. For her, Periscope has been “total self-discovery. . . it’s made me realize I can be on the other side of the camera and I kind of thrive there.” And if you watch her, you’ll think she’s been doing video for years!

Even though they all were afraid of going live, each one of these women talked about how important it was to push through that fear and hit the broadcast button. When all was said and done, it wasn’t nearly as bad as they thought it would be. And over time they have all become very good broadcasters! They were able to conquer their fears and tap into a certain amount of strength they didn’t really know they had. As a result, they are reaping the benefits both personally and professionally. They’ve all made friends, met other scopers in person, and their businesses are growing because of their live streaming activity.

Whatever your interests are, find a tribe, or group, that you resonate with. If you surround yourself with a group of people you feel comfortable with, and accepted by, you will be more likely to hit that broadcast button. You’ll know those people think a lot like you, and will have your back. And because you know they want to hear what you have to say, that’s one less thing you need to be concerned about. The common interest becomes the primary focus, and broadcasting is simply the tool we use to connect and communicate with each other. For many of us, the #PetLoversTribe serves that purpose.

Tricia, Jamie, and Monique all talked about how having a strong community to support them made it easier. And, because they are all pet lovers and work in the pet industry, the #PetLoversTribe is a perfect fit. Through the #PetLoversTribe, all of us have been able to meet people with common interests (pets and live streaming) and support each other. Knowing we are talking to other pet lovers, people who want to hear what we have to say, helps greatly to ease the nerves!

You Can Do It

If you’re still on the fence about hitting that broadcast button, reread some of the quotes above. Then find a group that fits your interests. If you’re a pet lover, come join us in the #PetLoversTribe. If you have other interests, find a group of people who share those interests with you. You’ll find the encouragement and support to help you find the strength to hit that broadcast button.