The list of live streaming apps is getting longer 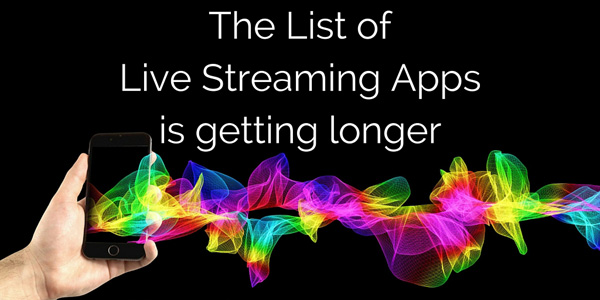 Live streaming video is growing by leaps and bounds. Sometimes it’s hard to keep up with all the new apps though, so I put together this list. Some of these are more popular than others, and most will probably never really catch on. But, the fact there are so many shows how mainstream live video is becoming.

I’m primarily using Periscope and Facebook Live, and have not used most of these, but have made a note on the ones I have tried at least once.

Busker – Live video, with an option to accept payments. (iOS, Android coming soon.)
Follow me on Busker, my username on Busker is @kopiwoda.

EYETOK – A Spanish-made social networking platform. (iOS, Android)
I tried Eyetok but deleted it because I was required to enable location.

Firetalk – Live video with one or two people on screen. Works on desktop devices running Chrome or Firefox browsers, or iOS devices via their mobile app.

GoLIVEWith – (coming soon) GoLiveWith is a free broadcast network that lets you share your passion with public audiences, private groups and your social networks.
I reserved my username on this one several months ago, but have no idea when they intend to launch.

Hang w/ – Hang w/ is live-streaming video, with a monetization layer built in. Ads are shown before and after broadcasts and broadcasters can earn 25% of the net advertising revenue earned by Hang w/ from your broadcasts.

Huzza – This live stream app offers a free plan that allows people to broadcast to up to 25 people. Three other plans are available to broadcast to more people, including monetization options, private broadcasts, and having up to four people on a broadcast. Sign up with Twitter or Patreon.

Kanvas – This is a live stream app, owned by AOL, and geared primarily toward teenagers. (iOS, Android)

Live:Air Solo – Uniquely designed for the iPhone, Live:Air Solo is packed with real-time creative tools such as graphics, overlays, transitions

Live.ly – Created by musical.ly, broadcast and receive virtual gifts from your viewers. (iOS)

Livecoding.tv – Watch coders code products live and hang out with them.

MeVee – Broadcast to the public or create a group for private broadcasts.
I tried MeVee several times, both as a broadcaster and viewer, but found it to be extremely glitchy.

Nom – Nom is a new way to explore the world of food, cooking and travel through the eyes of makers, creators, voyagers and chefs. (iOS)

Periscope – Explore the world through someone else’s eyes. (iOS, Android)
Follow me on Periscope

Smiletime – Broadcast to viewers, invite a viewer to appear in video chat, up-vote each others’ comments, live polls.

Snapchat – Not live video, but is included here because it has a video component and is used by many live streamers. (iOS, Android)
Follow me on Snapchat (username @kopiwoda)

Streamup – Join our community to go live, chat together, and support your favorite musicians. (iOS)

Tumblr – Tumblr doesn’t have a live stream app. Instead, they allow you to syndicate your broadcasts from YouTube, YouNow, Kanvas, and Upclose.

UenMeapp – UenMe is a fun way to privately video chat with anyone and charge for your time. (iOS)

Upclose – Invite your friends to your broadcast. Do a Duo and show up in the live video, then everybody will be able to watch both of you. (iOS, Android)

YouTube – Coming soon for all, but some people have already have it.

If you want to keep up on the new live stream apps as they come out, I’ll try to update this list periodically. I also have a Twitter list I am adding to as I see them (if they have a Twitter account). You’ll find it here: Live Stream Apps.

I broadcast regularly on Periscope and Facebook Live on my profile and my business page. Follow me and come say hello!

Not sure how to use live streaming for your business? I can help!
Get started with my Live Stream Jumpstart for Your Pet Business program. 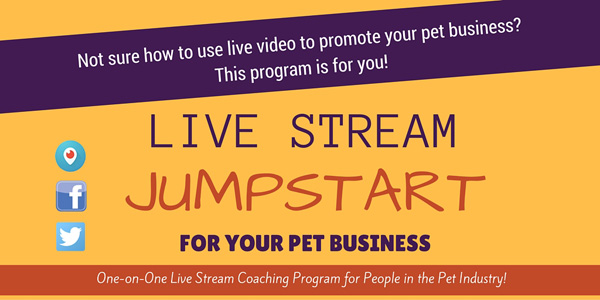