Not Sure Where to Start With Social Media? 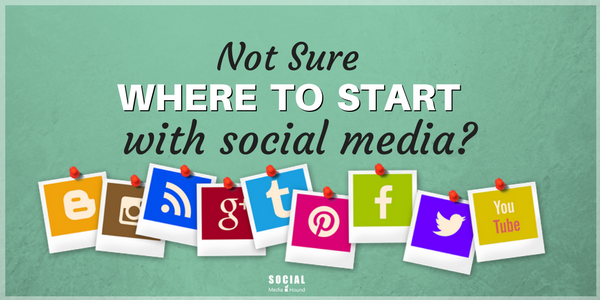 Not sure where to start with social media?

Not long ago, someone contacted me for help with social media for her new business. She had a website and accounts on more than 30 social media platforms. Her thought was that having a ton of social media accounts, linking to them on her website, and posting on them once in a while would make her phone start ringing off the hook. When that didn’t happen, she couldn’t figure out what she was doing wrong and gave me a call.

When I looked at her website and social accounts, it was easy to see what the problem was. Her website was in pretty good shape but she wasn’t doing much at all with her social media accounts. She posted on them from time to time but wasn’t consistently active on any of them. She thought if she shared a link or meme once in a while, or posted something about her services, it would drive traffic to her website and bring in new clients. Unfortunately that’s not how it works.

Most small business owners get overwhelmed when they think they need to start using Facebook, Pinterest, Twitter, Instagram, Snapchat, YouTube . . . and . . . and . . .  Well, I’ll just stop there in case you’re one of those people who get nervous thinking about all the social media sites you’re not active on. The thing is though . . .

You do not have to be active on all of them!

In case you didn’t get that, let me repeat it.

You do not have to have to be active on every single social media platform to grow your business!

Commit to one social media platform

Having an account on a social media site isn’t the same as being active on that account. Of course, it’s a good idea to snag your preferred user ID (if available) on at least the most popular social platforms. This is a good idea for branding and to ensure you have the account, in your name, when you decide to start using it. In the beginning though, you want to focus on being active on one account.

Unless you’re already a social media rock star, identify one social networking site to focus on. The idea is to find the one that is most likely to be where you will connect with new and established customers. Because of the fact that it has over 2 billion active users each month, Facebook is normally a reasonable place to start. However, if you’ve done some research and find that your audience prefers another social network, that may very well be the one you want to focus on first. Once you’re able to determine which one makes the most sense for you and your customers, dive into that one! Make a commitment to learn how to use it, become active on a regular basis, and get to know your followers.

There is an exception to using the social platform you identified as the best one for your business. If you’re really averse to using it or are simply too intimidated, go with the next one on your list. Later, after you’ve learned your way around one platform, you may feel more comfortable about using the top one. I find that some of my clients forego doing any social media because they don’t like a certain platform, usually Facebook. If this is the case for you, start with another and put Facebook on the back burner for now. Since social media is pretty much a must for business these days, you want to be sure you aren’t left behind.

Just like anything else, if you’re trying to do too much you run the risk of burning out. That can get you so frustrated that you decide to quit. Focusing on one account will help combat the overwhelm. You will create more meaningful relationships with followers, and see better results than if you spread yourself thin on several accounts.

Back to my client

Let me go back to the woman I talked about at the beginning of this post. Although she was a bit unusual because she was trying to use so many accounts, she’s not alone. Many people think they have to be everywhere on social media. After my client did some research on where her audience was she decided Facebook made the most sense for her business. Since she had no plans to be consistently active on the 30+ accounts she had created, we removed the links to those accounts from her website and put them on hold. The only platform she decided to focus on is Facebook, and it’s working! She’s getting new clients, isn’t feeling overwhelmed, and is even enjoying learning her way around Facebook. But, since she has the other accounts already set up in her business name, they’re available if and when she decides to use them.