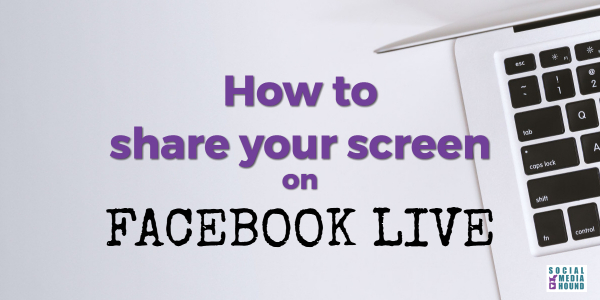 Facebook Live now has built in screen sharing that can be used from your desktop. Until now, the only way to share your screen during a live broadcast was to use a third party app. Now we can do it right from Facebook, and it works on personal profiles, pages, groups, and events. Although it does have some limitations, it’s extremely easy to use, and since it’s built in to Facebook, there’s no added cost. In this post, I’ll show you how to use the new Facebook screen sharing feature, and talk a little about some of the pros and cons.

At this point, the new screen sharing option only works on the desktop app, on Chrome. And, the first time you use it, you’ll be prompted to install the Facebook Screen Sharing Chrome extension on your browser.

The screenshot below shows a status update on my personal profile. When I click on ‘Live Video’ it will bring up another screen that allows me to select more broadcast options. 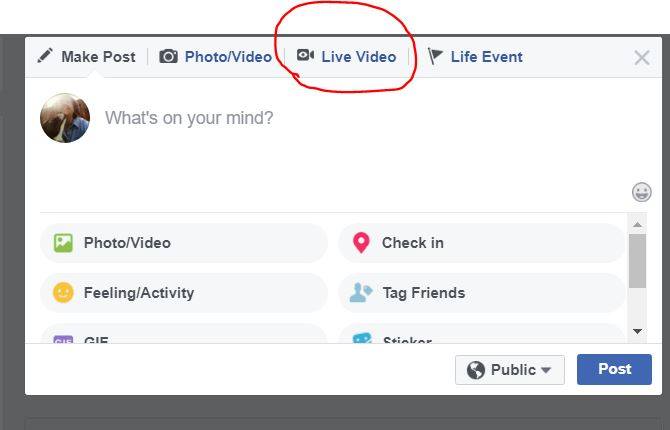 When starting from my personal profile, the default location is ‘Share on Your Timeline.’ Wherever you start from, that will be the default. For example, if I am on a page, the dropdown will have that page selected as the default. The same is true for a page, group, or event. Just be sure to double check the dropdown to make sure your broadcast is going where you want it to go!

You’ll have the option to share your screen or use the camera. The camera is used by default, but if you want to share your screen, just click the ‘Share Screen’ button. It’s important to know that you can do one or the other for the entire broadcast. You cannot switch from one to the other while you’re live. Keep in mind that when you’re live, you will see ‘End Screen Share’ at the bottom of your screen. If you click it, you will end the entire broadcast; not just the screen sharing!

If you have more than one camera and mic available, you can select which ones you want to use. 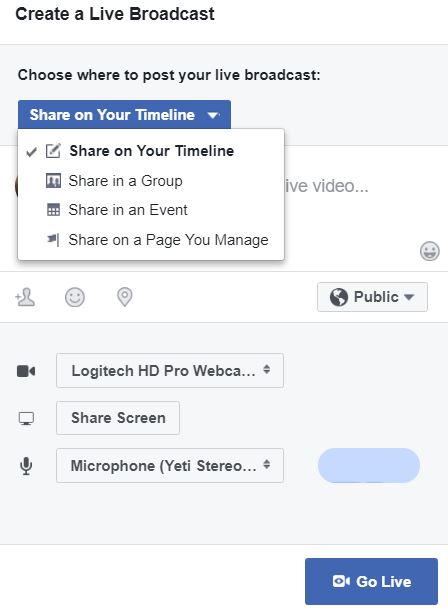 When you click the ‘Share Screen’ button will, it will have a darker blue outline, like this, then a new window will pop up with screen sharing options.

You can share your entire screen, a Chrome tab, or an app window. Whichever one you select, it will be the one you will use for the entire broadcast. When you’ve selected what you want to share, click ‘Share’ in the bottom right to preview. If you share anything other than your desktop, it will open that tab or application window. You’ll then have to go back to the Facebook tab to start the broadcast. For this reason, if you’re sharing something on Chrome, it’s best to have two separate Chrome windows open, rather than two tabs in the same window. 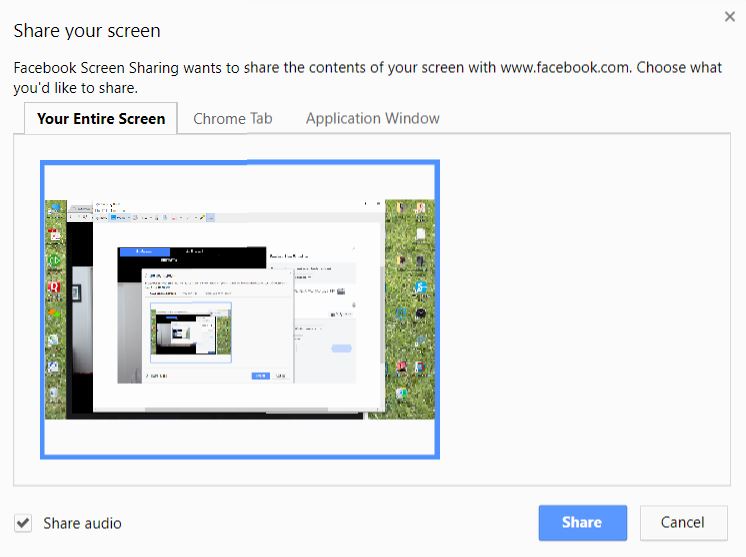 Once you’re ready to start your Facebook Live broadcast, click ‘Share’ and you’ll be taken back to the broadcast window. If it all looks correct, click the ‘Go Live’ button and you will be sharing your screen with your viewers. 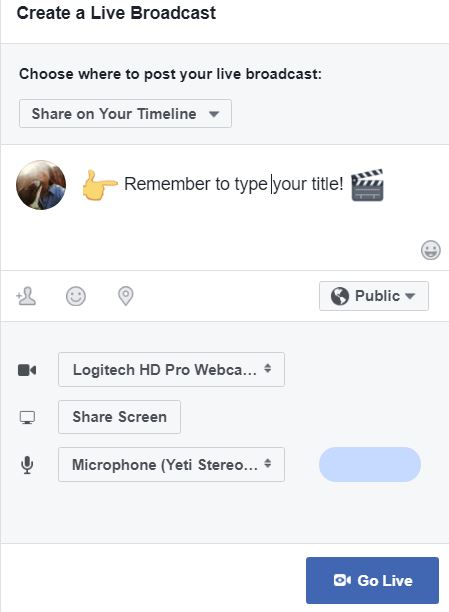 I’ve used the new Facebook screen sharing a few times, and it has been a bit glitchy. I did one broadcast showing how to use the new feature, but my video went a little wonky and wouldn’t show all my screenshots. Unfortunately, I didn’t realize it until I watched the replay. For now, I’ll probably stick with third party apps BeLive.tv and OBS (Open Broadcaster Software). But I’m excited to see how the built in Facebook screen sharing will evolve. As with any other new Facebook features, I expect we will see improvements over time.

Here are a few of the pros/cons I’ve noticed so far. Hopefully it won’t be long though, before these things are addressed.

Have you tried the new Facebook Live built in screen sharing feature yet? What do you think? Do you think you’ll start using it?