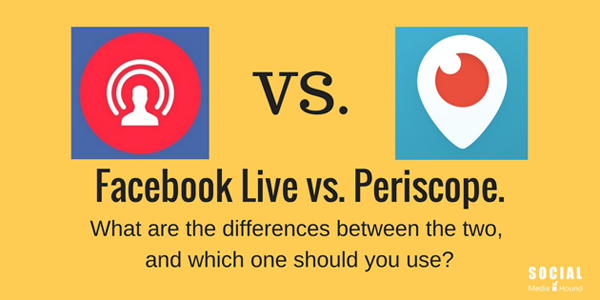 There are many live streaming apps out there but Facebook Live and Periscope are leading the pack at the moment. There are some major differences though, and if you’re wondering what they are, this article will help. I’ll go over some of the main differences and briefly discuss why you might want to use both.

Many of us, especially people with a business, have been on Facebook for quite some time and already have a following. Because of this, going live allows us to connect on a deeper level with these people, and build on established relationships.

INTERACTING WITH THE BROADCASTER

INTERACTING WITH OTHER VIEWERS

So, which one is for you?

There’s no absolute right answer to this question. Facebook Live and Periscope both have their pros and cons, but are very much worth the effort. Having an active presence on both platforms can be beneficial, and something I encourage my clients to consider. Taking into account the sheer number of people who are on Facebook, and the fact that most of us already have a presence there, it makes sense to use Facebook Live. And, since they’re giving live video preferential treatment in the news feed, now is the time hit the “Go Live” button.

If your goal is to reach out to people you don’t know, or more importantly, don’t know you or your company, Periscope is an excellent option. The fact that Periscope integrates with Twitter is a big plus too. It may not be as big and powerful as Facebook, but Twitter is well established with a big user-base of its own.

Whether you decide to use one or the other, or both, if you have a business it’s important to start using live video as part of your marketing efforts.

Which one do you prefer?

Do you broadcast on Facebook Live or Periscope? If so, which do you prefer and why?

Need help getting beyond the basics of live video? Contact me or sign up for my Live Stream Jumpstart program.